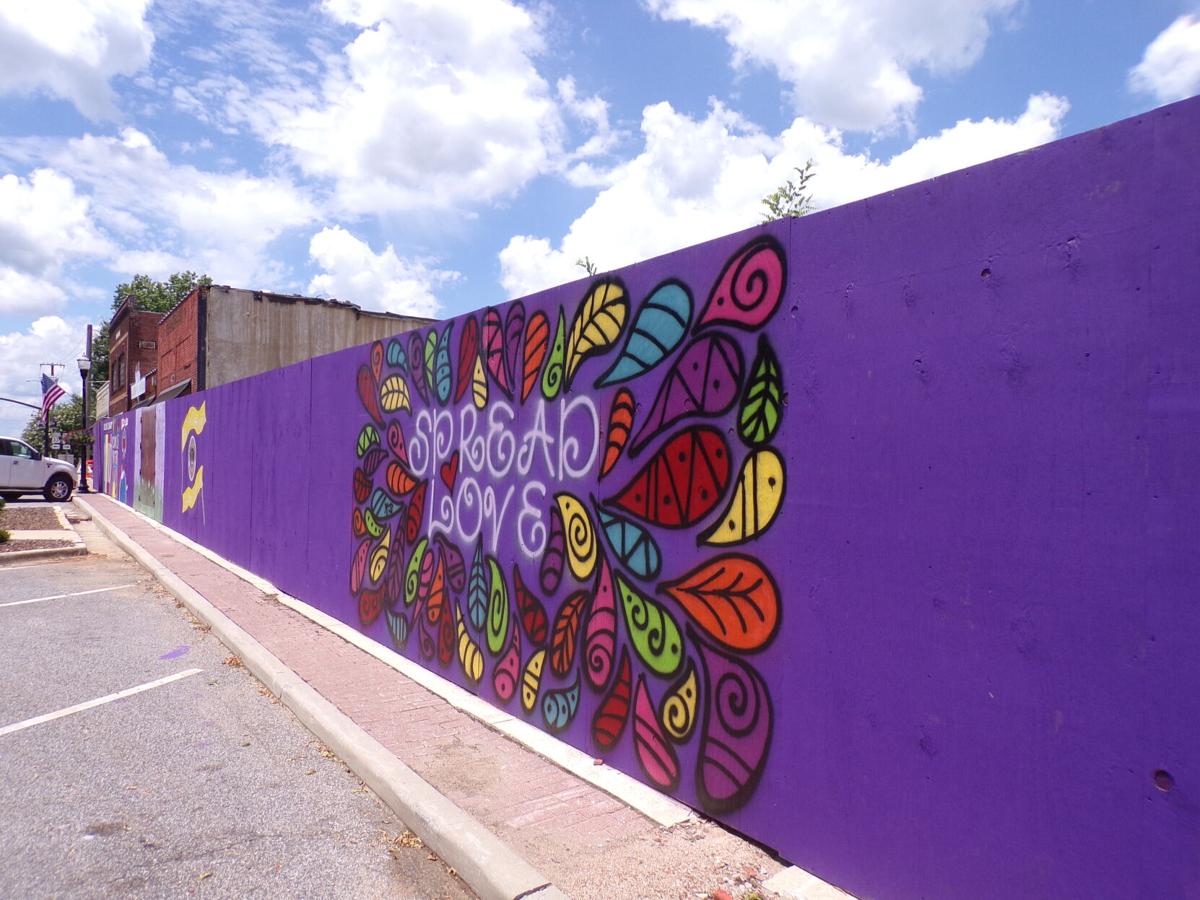 Local artists and volunteers continue to contribute time, work and creativity to see the completion of a community mural along Court Street in downtown Moulton. Moulton Lions Club member Coty Alred, who helps head the project, said although the mural is temporary, he hopes it will inspire others to "Be the change in the community." 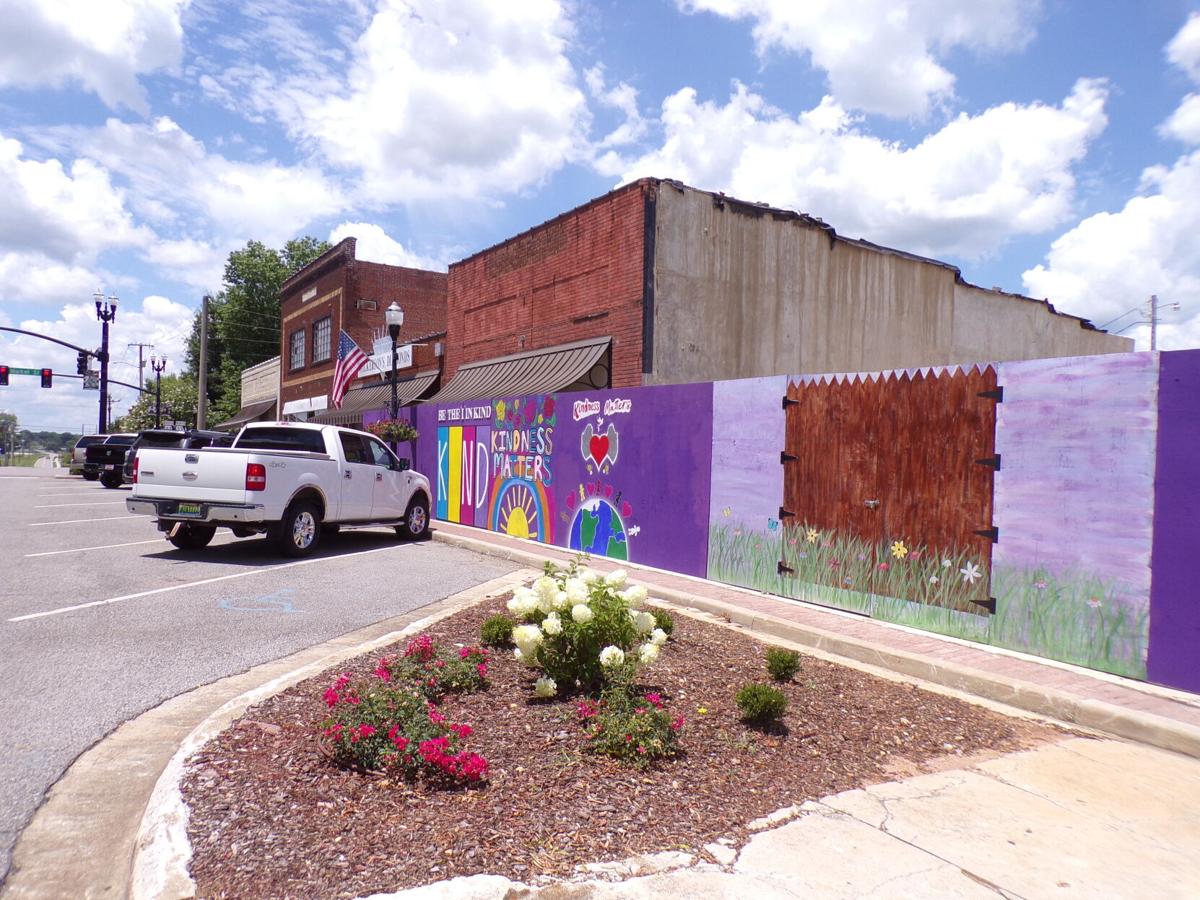 Local artists and volunteers continue to contribute time, work and creativity to see the completion of a community mural along Court Street in downtown Moulton. Moulton Lions Club member Coty Alred, who helps head the project, said although the mural is temporary, he hopes it will inspire others to "Be the change in the community."

Moulton's Lions Club Mural is gaining new attention after a few volunteer muralists were seen adding their own contributions to the temporary wall in downtown Moulton last week.

What started as a community service project for the Moulton Lions Club has grown to involve local artists and volunteers outside of the organization, including Katie Saxon, several volunteers with Cornerstone Church in Moulton, Shelby Thrasher, Brittany Alred, and Monica Hooper.

The project began when Moulton Lions met on the city square on the eve of the first anniversary of the April 22 fire that displaced four businesses along Court Street. That day, volunteers with the organization painted the base color for the mural, which is displayed across the temporary wall at the site of the rubble.

Moulton Lion Coty Alred, who helped inspire the original idea for a community mural, said the Lions Club motto, "Be the difference in your community," was always a focal point for the project.

He enlisted his wife, Brittany to paint the club's logo and motto on a panel near the center of the mural, but she also received some help from Monica Hooper to paint a fence gate and flower-scape on the actual gate of the temporary wall, which she said was inspired by Moulton Lions Club President Jerome Thompson.

When the project began, Thompson referred to Lawrence County as the "Gateway to Adventure," referencing a number of the county's most popular tourist attractions, including the Bankhead National Forest, Oakville Indian Mounds Education Center, and the Jesse Owens Park and Museum.

Last Monday and Tuesday, Moulton resident Katie Saxon, who is a stay-at-home mom and self-employed yoga instructor, began her own contribution to the mural, which reads "Spread Love."

She said she was approached about the mural by Louisa Sanders, the wife of Lawrence County Sheriff Max Sanders, after Sanders saw Saxons' chicken coop, which she had spray-painted at home.

"I kept seeing the blank side of our chicken coop and decided to paint it. I knew if I messed up, I could always paint a solid color over it," she said after explaining that her experience with spray painting large-scale projects began last December when she painted a galaxy-scape in her son's bedroom.

Sanders saw the finished chicken coop and put Saxon in touch with Coty Alred, who has organized mural contributions since the project began.

Saxon said Alred assigned her two panels and told her which ones to paint when she was ready.

"He didn't ask much about my experience, and when he heard my ideas, he trusted me to paint my section and gave me the freedom to design what I wanted," she said. "He just asked me to come paint. I was excited knowing this town needs something to liven it up. It made me appreciate myself that much more and made me more confident in my abilities."

The young muralist knew she wanted to include the words "Spread Love," but took a little longer to completely form the paisley design seen painted on her section of the mural after last week. She said the COVID-19 pandemic, the Black Lives Matter movement, and awareness for the LGBTQ community helped inspire the final product.

Saxon said she worked for two days, about two-and-a-half or three hours each day to finish her section. During the process, Saxon said she received lots of positive feedback from passersby on the Moulton Square.

"A few people drove by and honked and waved. I even had one person go by and throw up a 'peace sign' as I was working," she said laughing.

Though Saxon is not currently a Lions Club member, she said the project has sparked her interest to join.

The following Friday and Saturday, members of Cornerstone Church met on the square to contribute their portion of the mural.

One church leader, Susan Cheryl, who helped organize the church's Serve Day this year, said the mural was one of several volunteer projects church members participated in on Saturday.

"I contacted Jerome and asked him which areas in the community had the largest need. He put me in contact with Coty Alred and Tammy Roberts (with the Jackson House Foundation) for those two projects," Cheryl said. She said church members also volunteered for different projects and services at the Lawrence County Jail, Moulton NHC, the Moulton Dream Center, Papa Diggs Park in Courtland, and at Decatur West psychiatric ward.

Cheryl said Alred only instructed them to use the phrase, "Kindness Matters," but also gave them liberty in designing their own artwork.

"It is a phrase the Lions Club uses to encourage each member to leave a positive impact in their community," Alred said. "With this project and partnering with Cornerstone, I thought that this phrase would still allow artists' creativity while having a very encouraging message. They absolutely exceeded our expectations."

For Herring, she said she turned to the internet for inspiration in depicting "kindness," but also drew heavily from the Bible and icons that commonly symbolize God's peace.

"To be honest, I just googled 'kindness' and 'love,' and saw several (images) I liked exactly or pulled pieces from. Then I brought all the drawings together into one unified picture," she said. "I was thankful and excited to participate. I'm hoping to bring God's love, kindness, and peace into the forefront so others would be inspired to do as He does."

Cheryl said this portion of the mural was painted by the Holleys and the Owens. She said the section allows visitors to pose as the "I" in the word kindness, which is spelled out across a panel on the mural.

"They each did a fantastic job. We were excited to see the finished project and all the creativity that went into it," Cheryl said.

Alred said another local artist, Shelby Thrasher began working on her portion of the mural Saturday as well. He said her section will feature the words "Welcome to Moulton."

He said two other artists, Amanda Chubard and Anna Blaxton, should begin work on the final two sections of the mural soon. He said the two final artists are waiting on paint being used by Thrasher as she completes her work. He said the paint and brushes are provided by the Lions Club for artists who need them.

"We know that this wall is only temporary, but I truly believe that this project has been a powerful positivity movement for everyone involved and for the residents who drive past every day," Alred said. "I hope this opens doors for all artists involved and encourages everyone in Moulton, and those just passing through our community, to be the difference!"