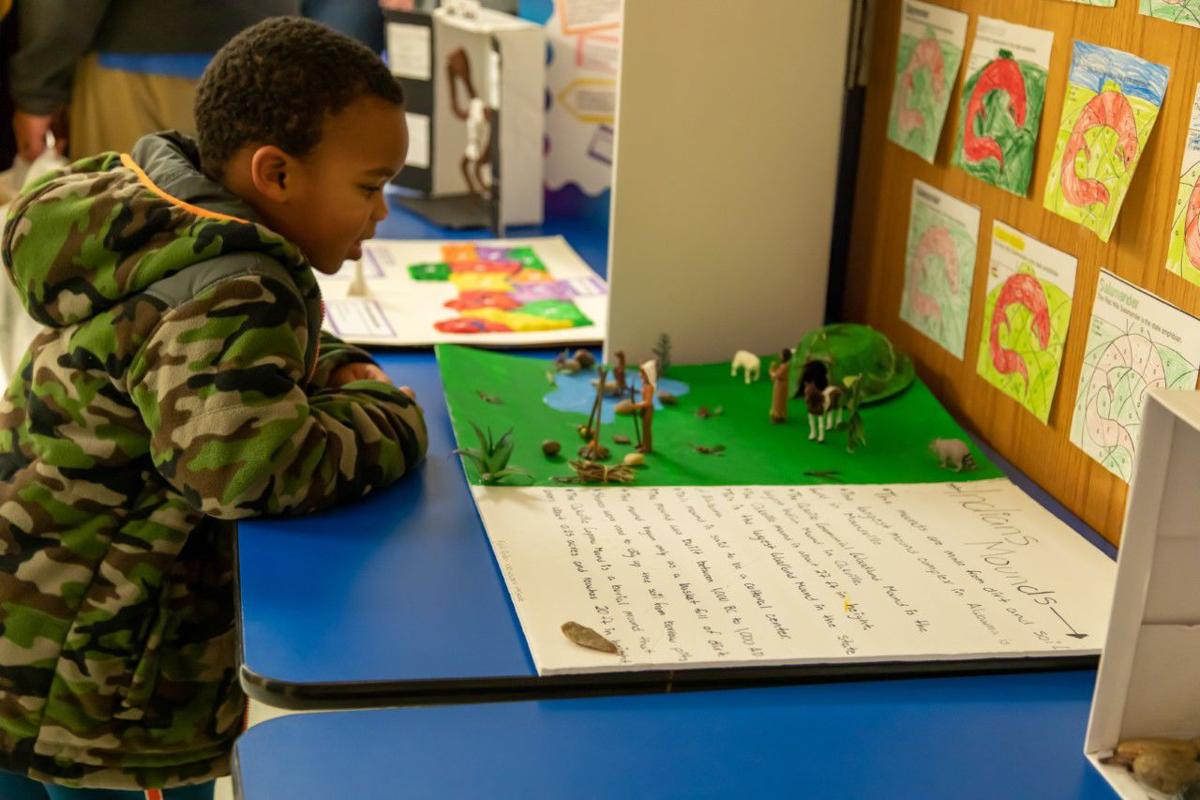 An excited student explores one of the many displays created by East Lawrence Pre-K through fourth-grade classrooms. 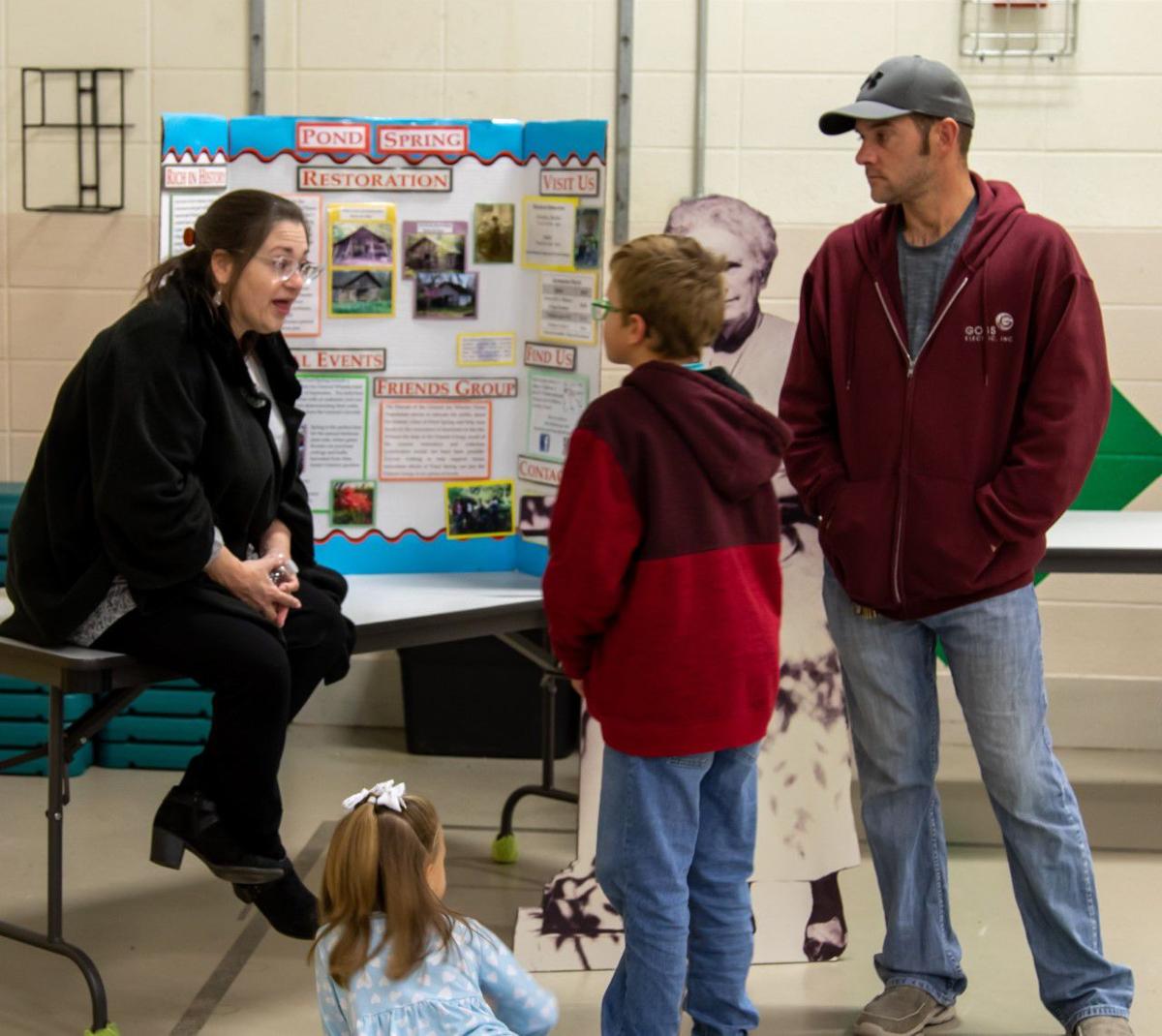 Local exhibits like the one pictured of General Joe Wheeler's historic home, Pond Spring, were also incorporated into the school's living museum. Above, Pond Spring Director Bruce Lipscomb talks with parents and children about the life of Gen. Joe Wheeler. 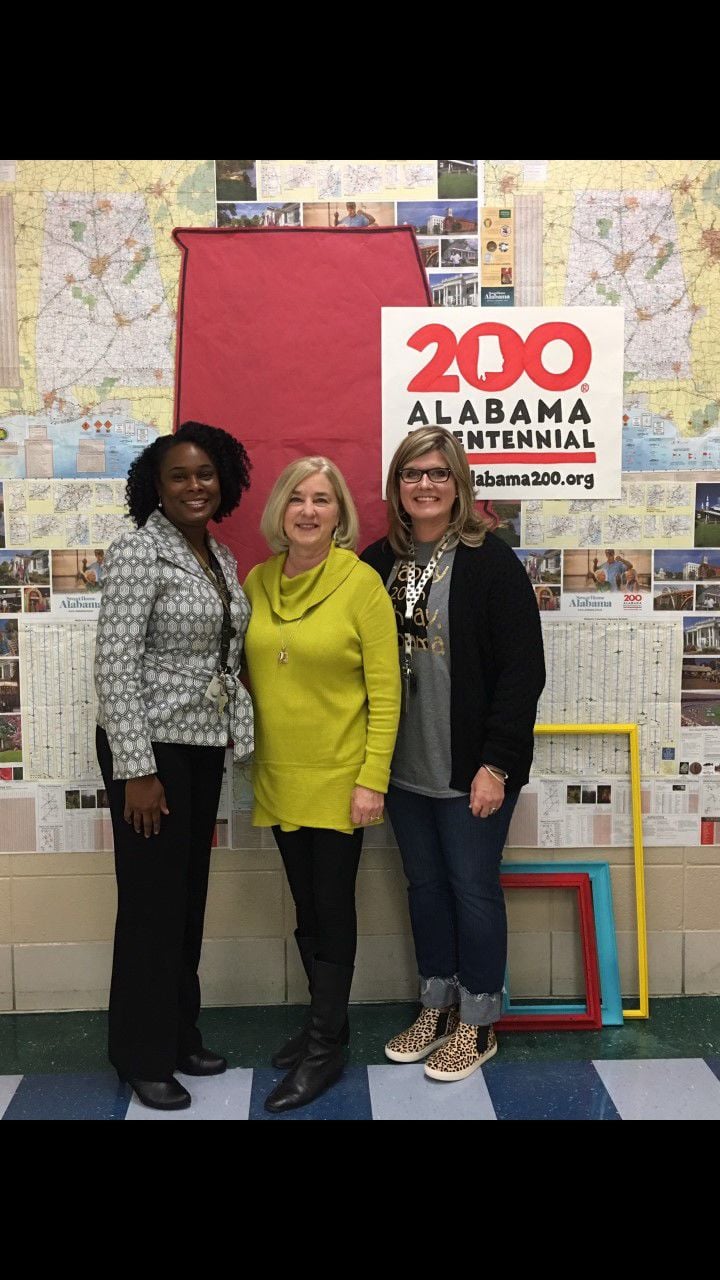 East Lawrence Elementary Night at the Museum organizer and teacher Marshela Segars and ELES Principal Tameka Madden were reunited with their fourth-grade teacher, Debbie Reynolds Wiggins, who taught them at Speake School and is retired now. Wiggins helped unfold Alabama's history during the school's Bicentennial presentations last Monday. Pictured from the left are Madden, Wiggins and Segars. 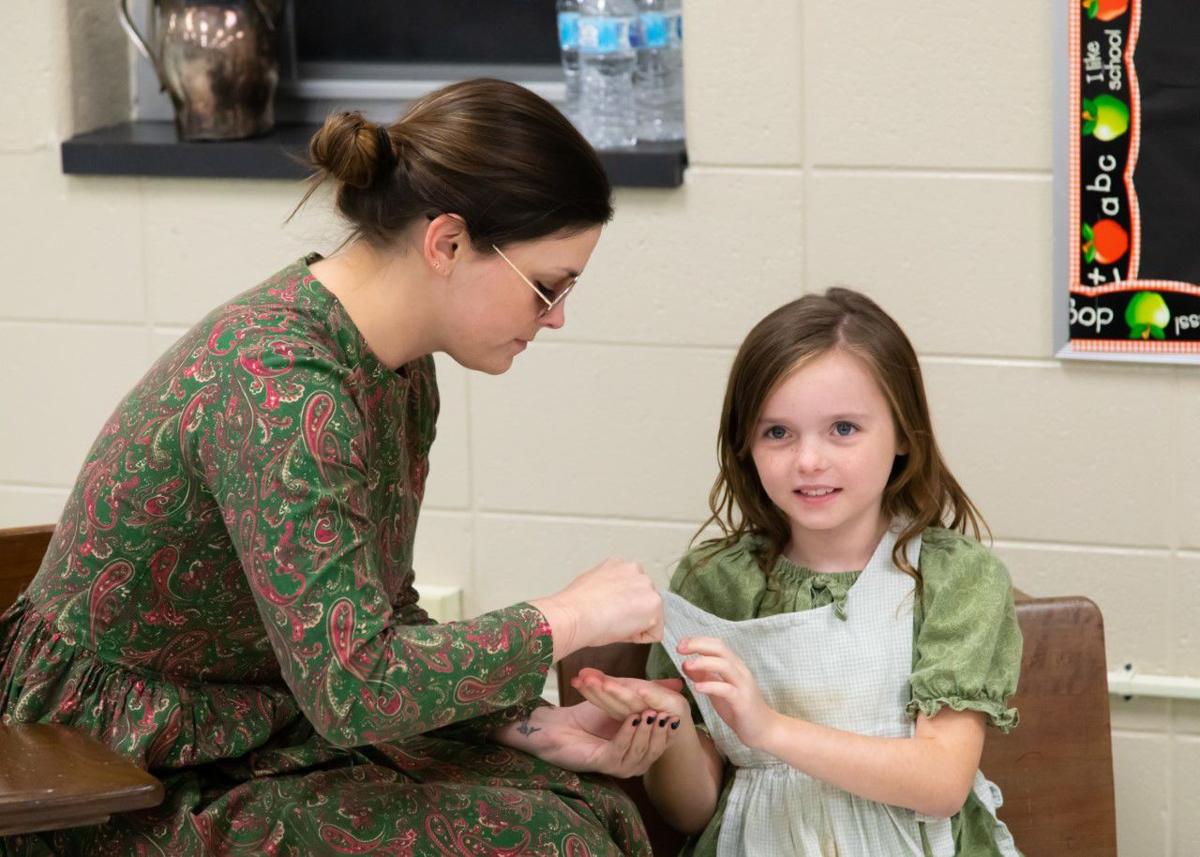 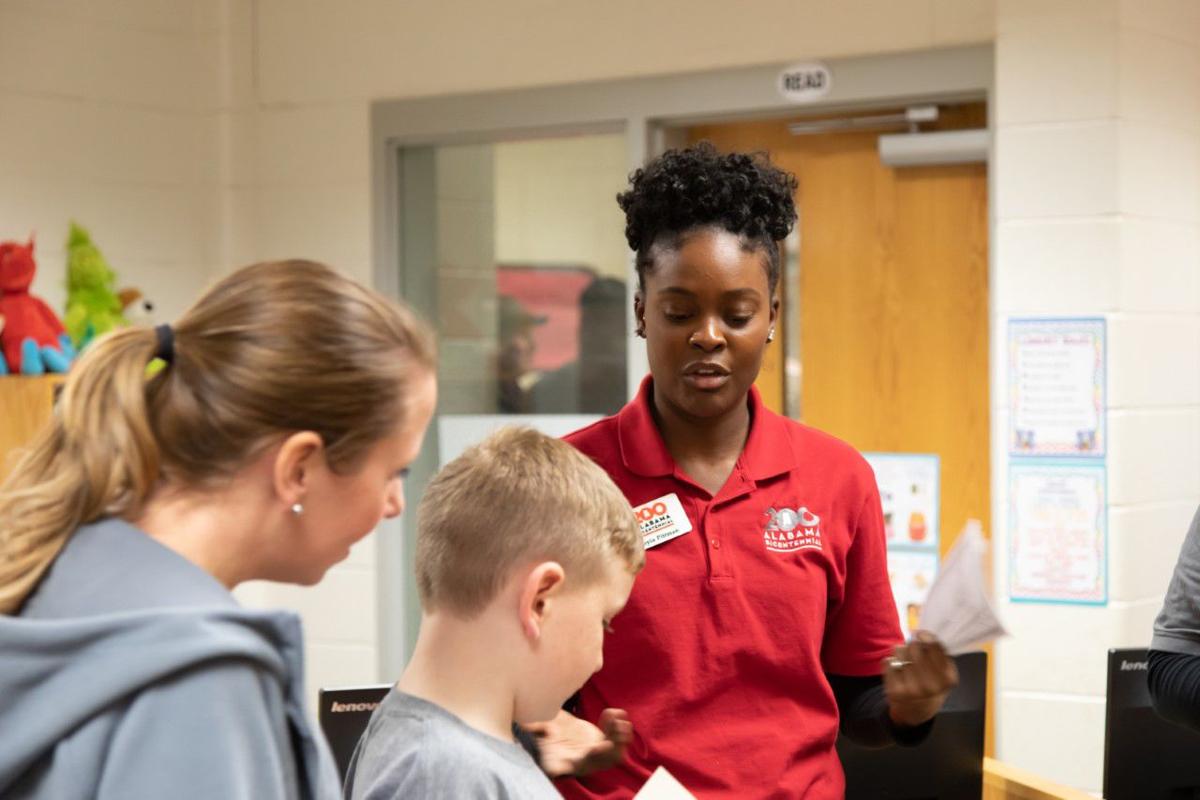 Joya, a state volunteer and visitor from Montgomery, is pictured with traveling backpacks from the Alabama Department of Archives and History, which were popular exhibits throughout the evening.

An excited student explores one of the many displays created by East Lawrence Pre-K through fourth-grade classrooms.

Local exhibits like the one pictured of General Joe Wheeler's historic home, Pond Spring, were also incorporated into the school's living museum. Above, Pond Spring Director Bruce Lipscomb talks with parents and children about the life of Gen. Joe Wheeler.

East Lawrence Elementary Night at the Museum organizer and teacher Marshela Segars and ELES Principal Tameka Madden were reunited with their fourth-grade teacher, Debbie Reynolds Wiggins, who taught them at Speake School and is retired now. Wiggins helped unfold Alabama's history during the school's Bicentennial presentations last Monday. Pictured from the left are Madden, Wiggins and Segars.

Joya, a state volunteer and visitor from Montgomery, is pictured with traveling backpacks from the Alabama Department of Archives and History, which were popular exhibits throughout the evening.

East Lawrence Elementary School was host to some 400 students, parents and visitors last week when the school presented it's Bicentennial Night at the Museum on Tuesday, Dec. 3.

The "living museum" was a working combination of exhibits contributed by local and state organizations like the Jesse Owens Museum, Oakville Indian Mounds, Pond Spring and the Alabama Archives team from Montgomery, but it also included live portrayals of famous Alabamians like Rosa Parks, Helen Keller and Sam Dale, according to event organizers.

One such organizer, Dr. Alice Evans became involved in the early planning for the event after ELES teacher Marshela Segars was introduced to a series of children's historical books called Alabama Roots, published by Seacoast Publishing with which Evans is affiliated.

Segars said she began attending workshops in the summer of 2017 to prepare for Alabama's upcoming Bicentennial. She first attended a seminar in Tuscumbia where she was introduced to an Alabama 200 Master Teacher, Carol Fretwell, who teaches in the Colbert County School System.

"She opened so many doors for me. All the connections I made with local contributors to this project and with others from all over the state were all made possible by her," Segars said. "I took this to (Principal Tameka) Madden, and she was so supportive from the very beginning."

Not long after attending the Bicentennial workshops, which sparked the vision for the living museum, Segars said ELES Librarian Dawn Berryman had attended a workshop of her own and helped to connect Evans and Segars as well.

The East Lawrence teacher added that she had previously purchased an Alabama Roots book while visiting the General Joe Wheeler home, Pond Spring, in North Courtland, before she ever met Evans.

The books each feature a famous Alabamian and are intended to engage students in our state's history, Evans explains.

"Alabama history is only taught in the fourth grade, and teachers have these text books with names and dates, but it's not very meaningful or engaging for the kids," she said. "These books are meant to make learning history more fun and enjoyable. The stories are being told in a more engaging way."

Individuals from the Alabama Roots books were brought to life last Monday at the East Lawrence school when volunteers like Evans' husband, Duane, stepped into character to portray their subjects for the museum.

As students and visitors meandered through the school visiting the exhibits and interacting with the actors at their own leisure, Evans and the other volunteers kept busy divulging some of the interesting and lesser known facts about Alabama's heroes.

Duane Evans said he spent much of his time discussing the life of early settlers in Alabama when it was still just a territory. In his portrayal as Sam Dale, a character he said is just as fascinating as Danial Boone or Davy Crocket, he retold tales of trading and buying from Native Americans and fighting in battles with the Creek Indians.

Evans shared the tale of Dale's most famous fight, the "canoe fight" that happened in November of 1813 on the Alabama River in the Creek War of 1813-14 where Dale singlehandedly fought four Creeks and killed each of his foes.

"He was highly respected by both white men and the Indians," Evans said. "I enjoyed being able to pass on the perspective of his life and retell his stories."

In Green's presentation as Rosa Parks, Madden said bus seats were provided by Lawrence County's transportation department, to engage students and attendees in Parks' famous refusal to give up her seat, which prompted the Montgomery Bus Boycott.

Green, who reenacted the Civil Rights activist for her visitors, also encouraged students to come up and experience a taste of the courage it must have taken to stand up against racial segregation in such a tense and trying time in Alabama's history.

Madden said passports, which mimicked the State Bicentennial Committee's passports to promote Alabama's historical landmarks and sites this year, were also made to encourage visitors to stop by each of the exhibits located throughout the school building. For attendees who add their passport stamped at each exhibit, they were entered into drawings for door prizes, also contributed by local volunteers and organizations.

Also during ELES' Night at the Museum, students not only enjoyed attending and engaging the exhibits, they contributed displays and artwork of their own, Segars added. Each grade level in the K through fourth-grade school was assigned an Alabama region and the teacher demonstrated ways they could present each region through artwork.

"This was such a great way to get the kids involved and include them in the storytelling," Alice Evans said. "I believe the event was a huge success, and I hope it prompts interest in continuing the retelling of Alabama's histories even outside the classroom."

Madden and Segars said they too hope to organize and coordinate future events similar to last week's presentation.

"This collaboration could not have happened without the support from our community and all the volunteers and museum contributors," Madden said. She said response from the parents was tremendous as well. "Several parents expressed that they initially came to the event just out of support for their child, but then they were surprised at how much they learned and enjoyed the program themselves," she added.

Segars said she was grateful for the opportunity to attend North Alabama Bicentennial workshops in the first place, which sparked the idea for ELES' presentations in the beginning.

"In 2017, Dr. (Jon Bret) Smith sent out the information and asked that representatives from our school system attend these workshops. This all initially started with a request from our superintendent," she said. "I've been overwhelmed at the support and willingness from our community--from Nancy Pinion and Debra Murner with the Jesse Owens Museum to Bruce Lipscomb with Pond Spring. I don't want to leave anyone out, but the help from everyone has just been wonderful."

Segars said she too hopes the Bicentennial celebrations this year, as well as East Lawrence Elementary's Alabama 200 Night at the Museum, spark a new interest and enthusiasm for passing on our state's history.