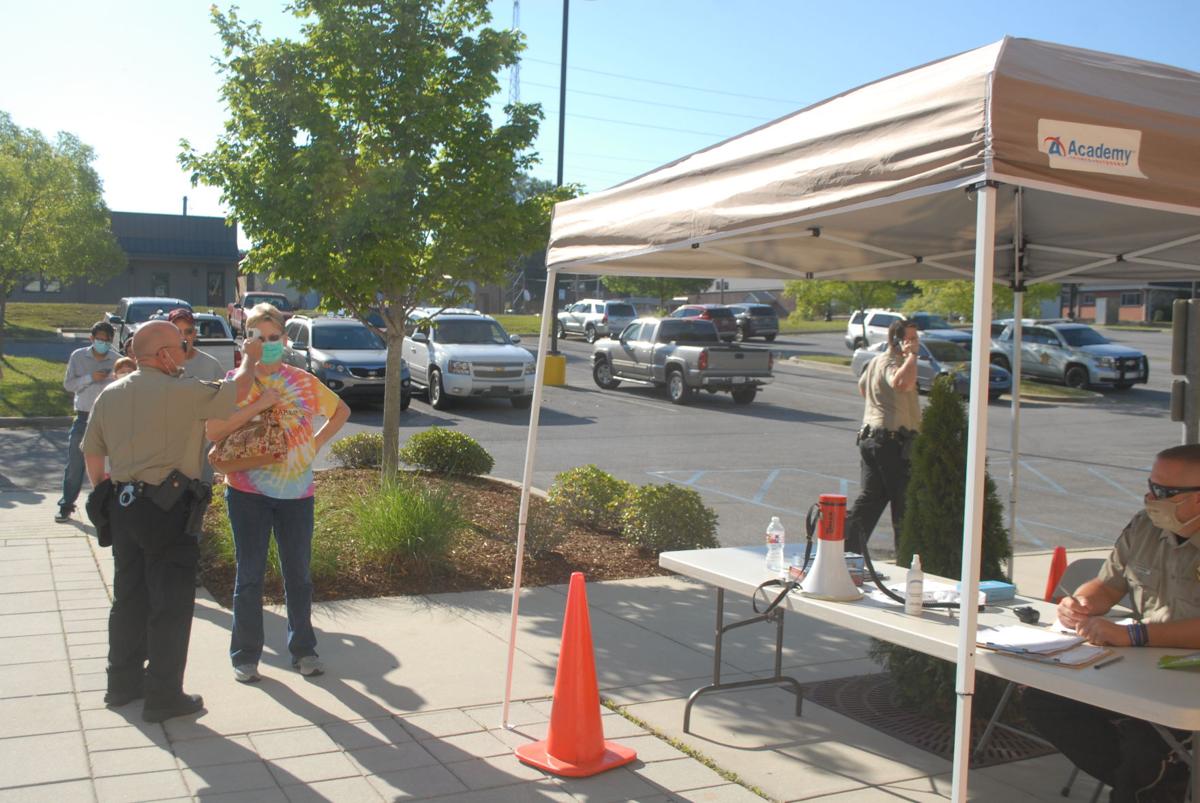 A Lawrence County deputy screens and takes the temperature of a courthouse visitor before she is allowed to enter the building on Tuesday. Those forming lines outside the courthouse have had average wait times of two to four hours due to modified staffing procedures and limited capacity at the Lawrence County Administrative and Judicial Building during the COVID-19 pandemic. 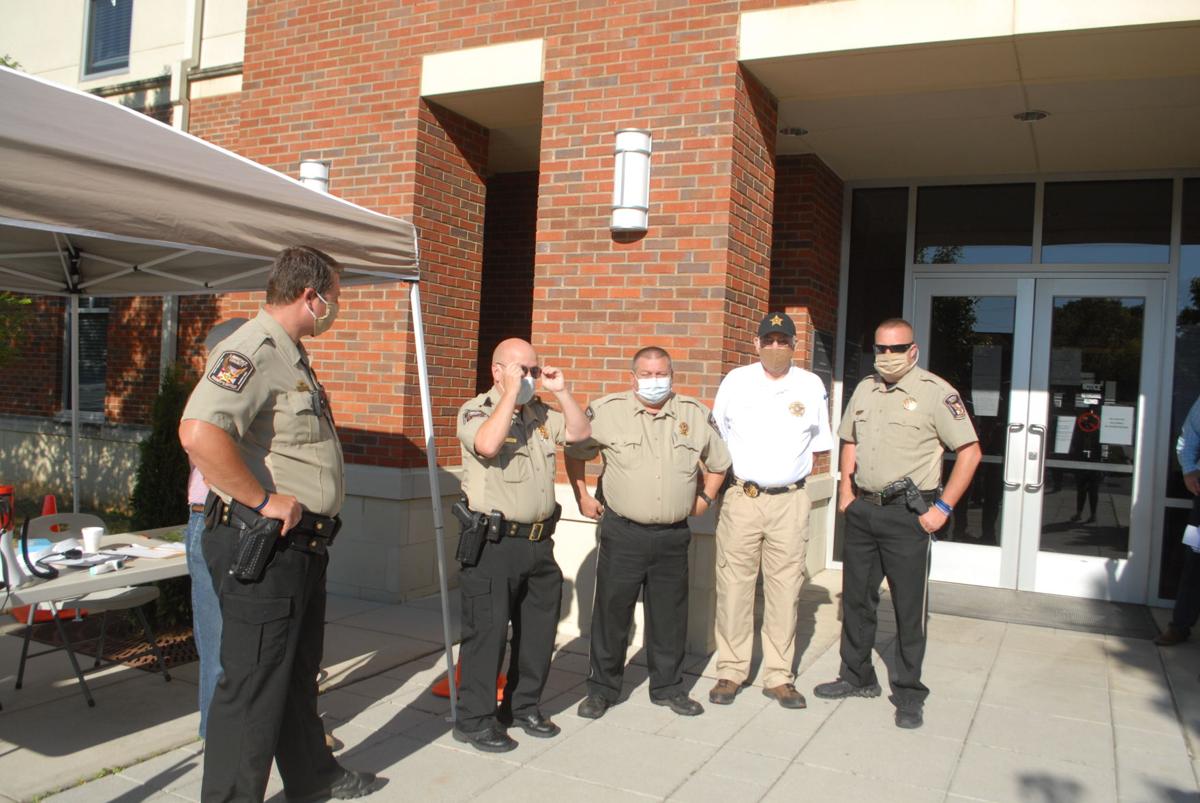 A Lawrence County deputy screens and takes the temperature of a courthouse visitor before she is allowed to enter the building on Tuesday. Those forming lines outside the courthouse have had average wait times of two to four hours due to modified staffing procedures and limited capacity at the Lawrence County Administrative and Judicial Building during the COVID-19 pandemic.

Modified staffing restrictions have been lifted at the Lawrence County Revenue Commission office this week to lessen extensive wait periods for tag purchases and renewals.

Lawrence County Revenue Commissioner Brad Henderson, whose office saw daily staffing cut in half in response to the COVID-19 pandemic, said his office was back to operating at full capacity on Monday.

“With the limited number of people allowed inside the building at one time, I’d say we got to see between 10 and 20 percent more clients yesterday than we have since reopening to the public,” Henderson said on Tuesday.

After closing county offices to the public in March—following health restrictions put in place by the state—commissioners voted to reopen the Lawrence County Administrative and Judicial Building to the public in May. However, commissioners said only 10 visitors could be permitted to enter for each floor of the three-story courthouse due to social distancing guidelines set on federal and state levels.

At 8 a.m. on Tuesday, two lines had already formed in front of the courthouse with at least 12 visitors waiting in each.

Lawrence County deputies, who work the front entrance of the courthouse passing out numbers and screening visitors before they enter, said lines had likely started forming at about 5 that morning.

“Those who line up for the tag office have an average wait time of about two hours, but some have had to wait up to four hours,” one officer said. “Most are here for tags or for court. We give numbers to the first 10 to 15 arrivals. If they have a two-hour wait time or longer, we let them know they can leave and return without losing their number or place in line. Many just choose to stay and wait in the sun.”

The officer looked at his logbook and said 97 customers had been permitted into the courthouse for the tag office alone on Monday after staffing practices had changed. This compared to 83 tag customers who were able to enter the business day before.

Before courthouse visitors are allowed to enter, Sheriff’s Office personnel screen each visitor for possible symptoms, take their temperature and offer hand sanitizer at the courthouse entrance. Visitors are required to wear masks or facial coverings before being permitted inside.

“We are very thankful for Sheriff Max Sanders, Investigator Chris Waldrep and their team. There’s no way we could do our job without them,” said Henderson.

Henderson stressed that an outdoor drop box was placed at the front entrance to the courthouse to reduce wait times for those who are renewing vehicle tags.

Anyone who is not acquiring a tag for a recently purchased vehicle has the option of dropping payments and tag renewals into the dropbox, mailing them in, or filing them online, he added.

“We only need to see you in person if you have purchased a new vehicle or a ‘new-to-you vehicle,’ or if you are transferring a tag, or if you’ve recently moved into Lawrence County and you need to do a transfer,” Henderson said.

He also encourages clients to call ahead before arriving at the courthouse.

“Our phone lines are open. They ring off the hook, but it is much better to call ahead to find out what you need to perform your renewal or tag purchase rather than have to come up here and wait for two to four hours just to find out you’re missing proper paperwork,” he said.

Henderson said his office is also working on installing computer software that will allow vehicle registration for recent purchases and transfers to be processed virtually.

“I wish we had already had that in place. It’ll take some time, but hopefully, in a year we’ll be utilizing those online portals,” he said.

The revenue commissioner’s office is also allowing elderly and disabled clients to make appointments—a modification that not only eases wait times for everyone visiting the office but also reduces the potential exposure for those most vulnerable to the virus, Henderson said.

Lifted restrictions on access to the inside of the courthouse may be put to a vote by commissioners in a regular meeting this Friday, according to Lawrence County Commission Chairman Bobby Burch.

He said allowing more visitors in at once may further reduce wait times for customers, but all those allowed inside the building will still have to adhere to strict social distancing procedures until the coronavirus subsides.

Burch said staffing procedures have been eased at all county offices at the discretion of department heads.

“This is a learning process for all of us. It’s trial and error,” he said. “May is already a busy month. It’s one of the biggest months for tag renewals, and you’ve got March, April and May that have all seen extended deadlines, and that month is coming up now, it’s getting tougher and tougher.”

An order from the Alabama Revenue Commissioner Vernon Barnett extended vehicle registration and renewals that were due in March, April, May and June until July 17.

Henderson said his office staff is caught up in processing June renewals that were mailed in as of Monday.

“Mail-ins were on delay, but our employees have stayed late and come in to work additional hours just processing renewals,” he said on Tuesday. “We know it’s been an extremely stressful time for citizens. We apologize for the delays; we apologize for the waits. We’re working as hard as we can and as fast as we can. We thank the public for their patience and thank our employees for their hard work and dedication.”