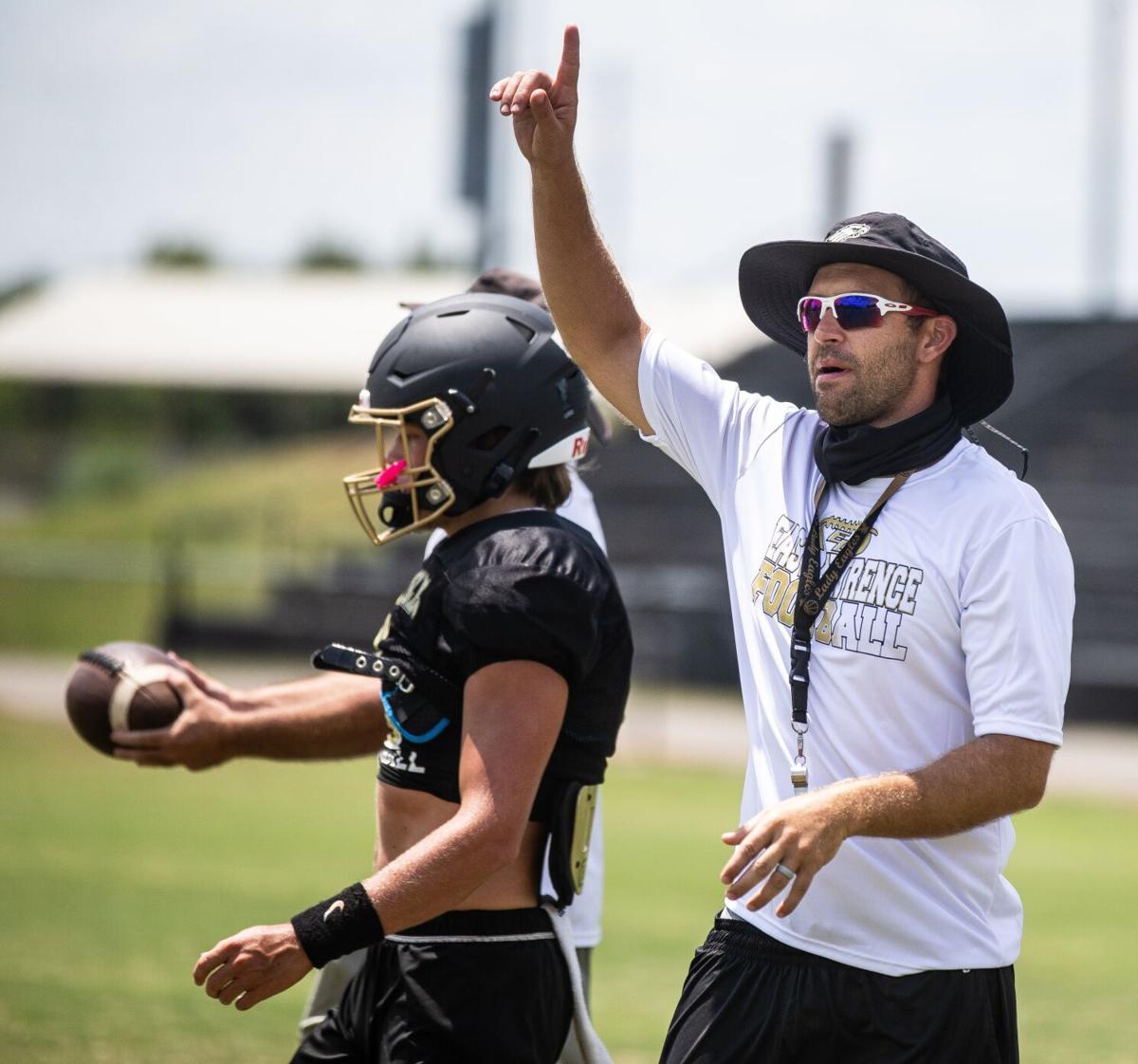 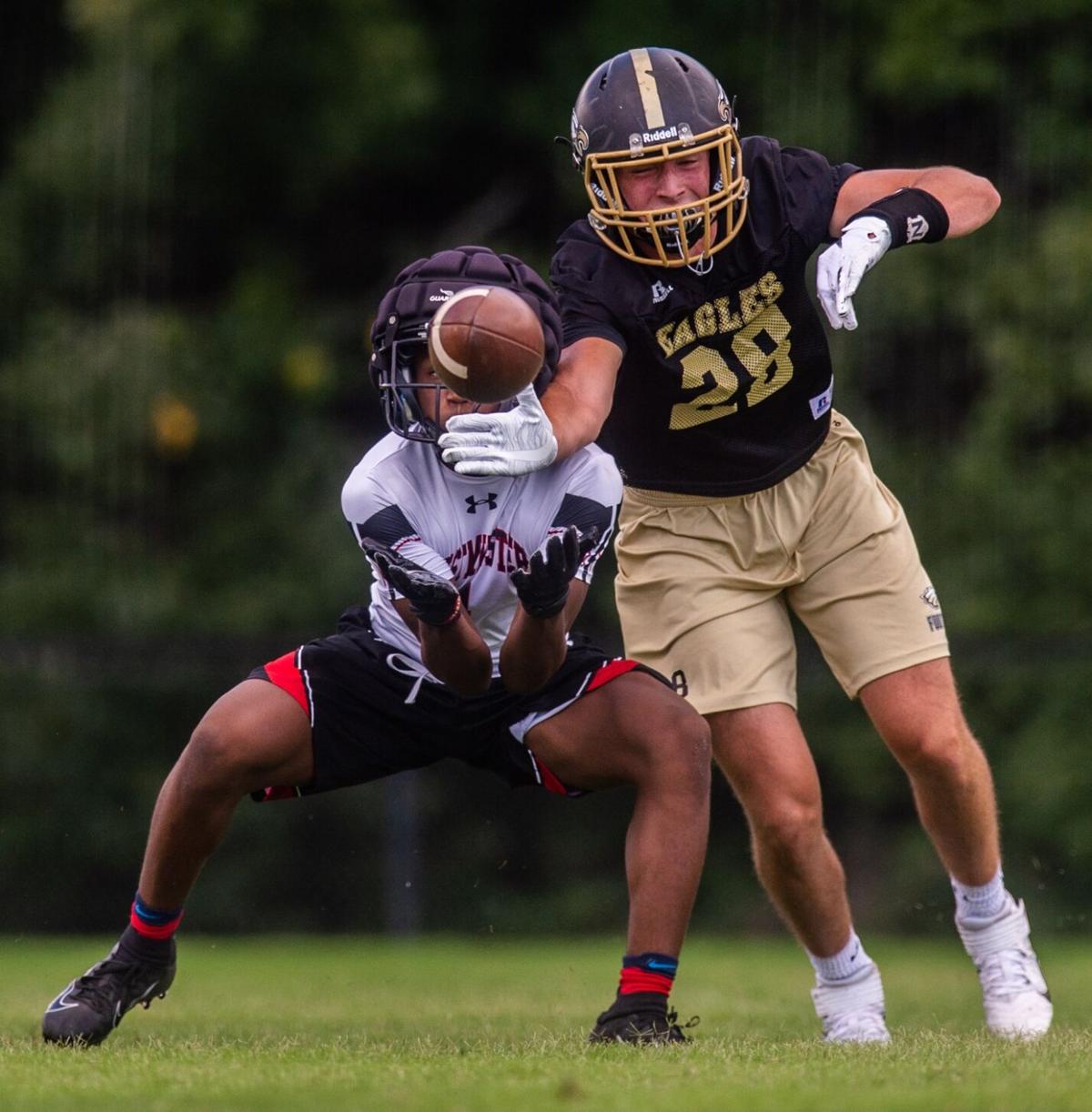 Instead, Culver can be seen donning a black and gold shirt with the phrase “Tradition starts now” written across his chest.

That simple phrase has become the rallying cry for the Eagles this year.

“People can talk about tradition and what it means, but to me there’s habits and then there’s tradition,” said Culver. “If you put something on your helmet and wear it every Friday, that’s not tradition. To me tradition is about winning and having a winning culture.”

Prior to this year, most people would say East Lawrence has a tradition of losing. The Eagles had a streak of 21 straight losing seasons that was only snapped last year with a 5-5 record. To date East Lawrence hasn’t had a winning season since 1997.

But Culver, who is in his first year as the Eagles’ head coach, isn’t buying it. As stated before, in his eyes tradition is winning, which is why they have adopted the motto of tradition starts now.

“I don’t want these guys to carry 22 years of pressure on their shoulders,” he said. “People can say whatever they want about our program and its past, but at the end of the day we’re focused on making our mark in this season. To us the tradition of this program starts with this team.”

They’re off to a great start. With a 14-13 win over Lauderdale County last week, East Lawrence earned their first 3-0 start since 1986, roughly 16 years before anybody on the current team was even born.

“It’s incredible, it really is. It’s something that is special for our kids, our coaches and our community and I’m super excited about it,” Culver said. “I think the most exciting thing to me is that we’re 3-0, but we still haven’t played as well as we can play. We can still get so much better.”

Culver knows the history of the program and how historic the win was, but he still hasn’t been around it when it was suffering through winless seasons. The seniors on this 2020 squad have.

“I can remember freshman year we didn’t win a single game and Lauderdale County stomped us,” said senior receiver and defensive back Nate Tucker. “Ever since then it was my goal to one day beat them. To do that Friday night, and to also be 3-0 for the first time in 34 years, man it’s crazy.”

The culture change that the program has undergone in the past three years has been an amazing feat to behold. From being considered one of Alabama’s worst programs to starting 3-0 and having talks of a region title, a home playoff game and possibly a deep playoff run.

It’s a change that Tucker and the rest of the seniors can’t even put into words.

“Back then we could get hit in the mouth a couple plays and that was it. We would lay down and give up,” he said. “Now it’s just different, I don’t even really know how to explain it. Our mindset, our mentality, it’s completely flipped from the way it used to be.”

It’s been an exciting three weeks to watch as East Lawrence has dazzled with heart stopping plays to win in the most astounding ways possible.

After beating Sulligent 41-12 to open the season, the Eagles knocked off cross town rival West Morgan thanks to a go ahead 92-yard fumble recovery for a touchdown by Isiah Hubbard. A week later they knocked off Lauderdale County 14-13 by stuffing the Tigers on a go ahead two point try.

It’s these games that have truly reflected the culture change at East Lawrence.

“In the past we don’t ever make those plays to win those games,” said Tucker. “And it really speaks to the culture change and the effort that we give. We don’t ever give up, even when we’re down, we fight all four quarters. That has made a huge difference.”

It seemed the goal of the season was always to get that first winning season since 97, but now the realization is this team is capable of doing so much more.

“We want so much more than to just have a winning season, because a winning season doesn’t guarantee you a playoff spot,” said Culver. “We want to make the playoffs, we want to win championships and these kids aren’t going to be satisfied until we do.”

So throw out the last 22 years, because Tucker and the rest of the Eagles are starting new traditions.