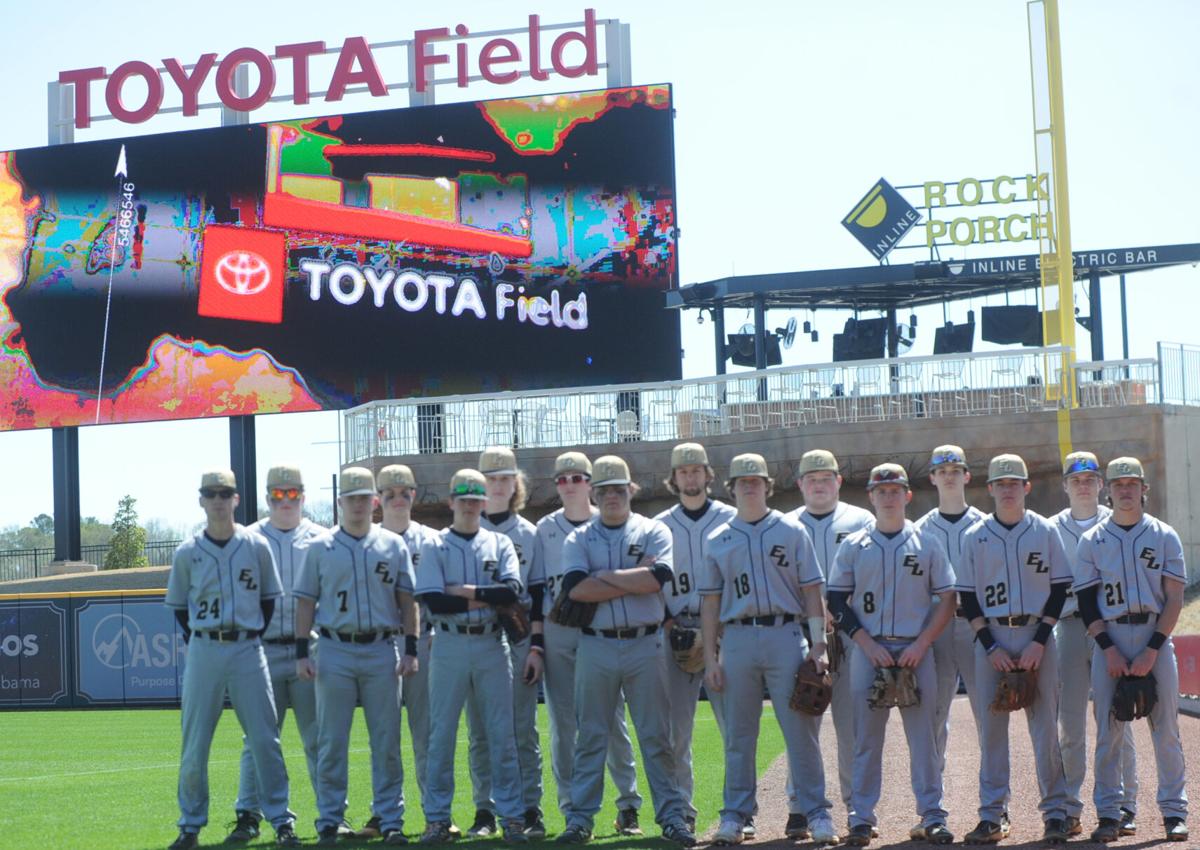 The East Lawrence Eagles played at Toyota Field, home of the Trash Pandas, this past Saturday.

The East Lawrence Eagles played at Toyota Field, home of the Trash Pandas, this past Saturday.

For three local teams, Saturday’s games weren’t about the score as much as the experience.

Players from Decatur Heritage, East Lawrence’s and Lindsay Lane’s baseball teams got the chance of a lifetime Saturday when they were awarded the opportunity to play each other at Toyota Field, home of the Trash Pandas, Madison’s new minor league baseball team.

“When I stepped on the mound and I looked out I was like ‘oh my goodness this is insane,” said East Lawrence pitcher Coleman Garner. “It was a crazy experience. Something I’ll never forget.”

Decatur Heritage and East Lawrence were the first set of local teams that played each other, taking the field after Bob Jones and Lauderdale County ended in a 6-6 tie. For most players, it was like Christmas, a day they had had circled on the calendar for quite some time.

“Our kids have been looking forward to this since we got the schedule,” said Decatur Heritage head coach Steve Meek. “This was a neat experience. Hats off to the Trash Pandas for putting on a great event.”

It wasn’t that long ago that Decatur Heritage won a state championship, which takes place at Riverwalk field in Montgomery. However, the Eagles haven’t been to Montgomery since 2017, when current seniors were in the eighth grade

“Unfortunately, none of these guys were around when we went to Montgomery back to back years and played at the Biscuits stadium,” Meek said. “Some of these guys have played here and there in travel ball but most of them haven’t experienced anything like this so I was glad we were able to get this opportunity.”

The Eagles had a big game, tallying nine hits as they went on to win 11-0. Good luck to the Trash Pandas trying to beat that mark.

“They’re a professional team so they’ll probably see some tougher competition but I’ll take it,” Meek said. “We crushed some early that, if the wind hadn’t been blowing, might have been out. I’m not sure there’s been a ball hit out of here yet.”

True to his name, Nash Rippen had a big day, ripping three hits and driving in three runs. Considering the Pandas have yet to play in the stadium, it might be the best hitting performance so far at Toyota Field.

“If that’s the case that feels pretty dang good,” Rippen said. “The guys for the Trash Pandas are definitely better than me, or anybody else out here, so it’s probably not something I can boast about for long.”

On the other side, for the Eagles of East Lawrence, the opportunity was perhaps even sweeter.

“I didn’t realize how important it was, not just for our kids, but our fans to get to play in this atmosphere and this venue,” said East Lawrence head coach Zach Standridge. “It really meant a lot for them to be here and we’ve just been soaking up the sights and sounds, having a really great time.”

The Trash Pandas reached out to Standridge about playing at the stadium, and while most would assume larger schools such as Bob Jones, who played the first game, would get all the calls, Standridge said it meant a lot to get the call.

“It’s really cool to be included. That’s the big thing with small schools we just want to be included,” Standridge said. “To play in this kind of venue, I think it’s something everyone should get to do one time.”

Montgomery is the current home of the baseball state championships, and while it’s unlikely that will change anytime soon, coaches said they would like to see Toyota Field get some consideration.

“I wouldn’t be opposed to having 1A-2A here, 3A-4A at the Birmingham Barons and the rest in Montgomery and just rotating it around or whatever,” Meek said. “This is a state of the art stadium and a worthy place to host any championship.”

In the meantime, though, players will just relish their chance to play at the home where future major league stars of the Los Angeles Angels will play.

“Playing here makes you want to work a little harder to maybe get the opportunity to play in a place like this as a player one day,” Rippen said. “Playing here, it was a dream come true.”